The BBC’s decision to refer to Rooney as the “greatest” goal scorer was an interesting one, especially when you consider that Gary Linker is the host of the show and would arguably have a better claim to the title than the Manchester United striker.

We thought that it might be worth having a look at the facts to see if there was anything in the claim that Rooney is the greatest England goal scorer of all time. His goals against Switzerland and San Marino in the most recent international break meant that he overtook Sir Bobby Charlton as the player who has scored the most goals for England, but is being the record holder the same thing as being the best?

First things first, let’s have a look at the facts surrounding the top three England goal scorers: Sir Bobby Charlton, Gary Lineker and Wayne Rooney. How many games have they played in? How many times have they scored? How many of those games were scored in friendlies? How many of the goals were scored in qualifiers rather than in the competitions themselves? We found out. For the purposes of this table we’ve decided to refer to the Home Championships as a competition as Wales, Scotland and Ireland were all good teams that were keen to beat England.

So what does all of that say? It depends on your opinion of several factors, of course. Should qualifiers count as much as goals scored in competition? After all 15 of Rooney’s goals came against opposition such as Liechtenstein, Macedonia, Estonia, Kazakhstan and San Marino – the latter only containing 1 professional footballer in their ranks and have scored only two goals since 1991.

Yet as far as Bobby Charlton is concerned 13 of his goals came in the Home Championships against Scotland, Northern Ireland and Wales. Despite the unquestionable rivalry that comes from those countries, are they really the toughest of opponents? This is from the Wikipedia article about the competition:

“However, the new international tournaments meant that the Championship took on added importance in certain years. The 1949–50 and 1953–54 Championships doubled up as qualifying groups for the 1950 and 1954 World Cups respectively and the results of the 1966–67 and 1967–68 Championships were used to determine who went forward to the second qualifying round of Euro ’68”.

That suggests that perhaps the Home Championships were more than just a glorified set of friendlies and could arguably be considered even more competitive than the qualifiers the current England team are having to play. Charlton scored his first Home Championship goal against Scotland in 1958 and his last against Northern Ireland in 1970. During that period England won the competition 9 times out of 13, sharing the winner’s podium on five occasions. It was never a procession for the English, at any rate.

As for Lineker, his record is the most consistent across all forms of game type and he also scored with the least amount of games – significantly so as it happens. His goals average was 0.6000 per game compared to Charlton’s 0.4623 and Rooney’s 0.4672.

There will be arguments for all of time about which player played against the most competitive opposition. Is the San Marino Rooney faced really so much worse than the United States team Charlton went up against, for example?

Yet the simplest way of identifying whether or not a player is netting against opposition of reasonable quality is by seeing how many goals they’ve scored in the actual competitions they were qualifying for and who the opposition was. After all, if teams have qualified for the World Cup or European Championships then it’s reasonable to presume that they are of a certain quality.

It’s also a sign of a player’s ability to compete at the highest level. In club football if a player scored consistently in friendlies but never managed to put the ball away when they lined up in the FA Cup or European Cup they would never truly be considered to be great, so why should it be any different in international football?

Let’s have a look at the goals scored by each of the players in either the World Cup proper or the European Championships.

Here’s the tragic reality of Wayne Rooney’s England career: he’s never done it when it matters. Where Gary Lineker has scored big goals in the World Cup and Bobby Charlton scored for England when they were on their way to winning the World Cup for the only time in the country’s history, Rooney was scrabbling around desperately in the major tournaments.

Can Switzerland, Croatia and Ukraine be compared favourably to the likes of Argentina and West Germany? Certainly not the latter when you consider they went on to lift the trophy in 1990 after knocking Lineker’s England out in the semi-final.

How about Uruguay compared to Argentina, Mexico and Portugal? Though Luis Suarez was the star of the Uruguay team in the 2014 World Cup, they hardly set the competition alight after consigning England to the ignominy of being booted out of the group after just two games.

Rooney As The Greatest? 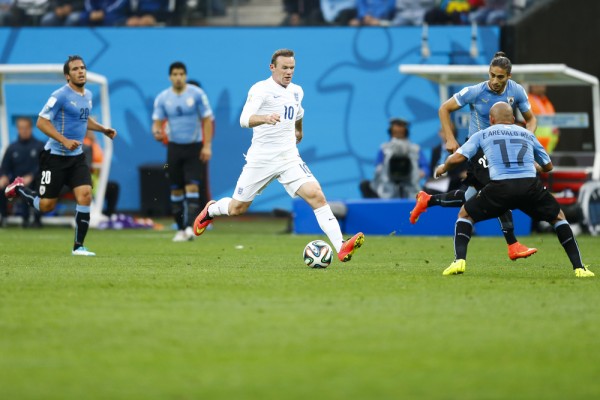 None of this is to diminish the achievement of Wayne Rooney. Whatever you might like to say about England’s opposition during the Scouse striker’s time leading the line, he’s still scored the goals. He’s notched up 50 goals in 107 appearances – not far off a goal every other game. If he had managed the same feat at club level he would be hailed as one of the best strikers of all time.

Yet there remains the nagging doubt that his inability to do it when it matters – whether because of injury or a lack of nous in the big games – will always taint his record. Goals against opposition like San Marino will never be given the credit that Rooney might feels he deserves, but it’s somehow fitting that the two goals that took him past Bobby Charlton’s record were against San Marino and Switzerland in one match that was a definite dead rubber and another that was virtually a procession.

The excuse oft trotted out in defence of Rooney’s poor showing in the major tournaments is that he was never surrounded by genuine talent. Yet over the past 10 years England’s team has featured players like Rio Ferdinand and John Terry at the back, Steven Gerrard and Frank Lampard in midfield and partners like Michael Owen in the front spots. Champion’s League or Premier League winners all.

Bobby Charlton was instrumental in England’s World Cup win in 1966, scoring in the group game against Mexico and netting twice in the semi-final versus Portugal. Gary Lineker can make a similar claim that his goals were of vital importance to England’s progression in the World Cups he took part in. Rooney can point to goals in group games as his only contribution to England’s attempts to take the world by storm.

Of course the big thing in Rooney’s favour is his age. Whilst neither Charlton nor Lineker will be adding to their tally any time soon unless there’s a huge shortage of strikers moving forward, Rooney is 29 years old and has plenty of time left to add to his goals for column. With a European Championship coming when he’s 30 and a World Cup when he’s 32, you have to assume that the lad from Toxteth will be able to notch up a few more goals before he’s past his prime. He may well be able to influence England for the better in a competition that matters. 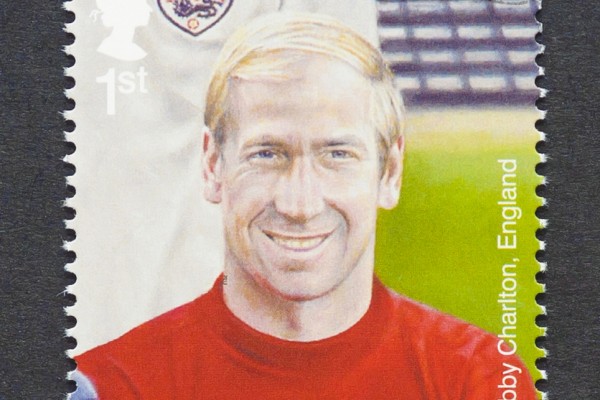 If he doesn’t win a trophy with England, though, will he ever really be able to be considered to be a better player than Charlton? 31 of the knight of the realm’s goals came in friendlies or qualifiers, whilst for Rooney that number currently stands at 44. 44 goals out of 50 that were scored in matches that either didn’t count for anything or were against lesser opposition. With UEFA’s decision to open the European Championships to more teams and involve more qualifying games, the amount of “unimportant” goals Rooney can go on to score could be large, but can he do it when it counts and prove his doubters wrong?

It’s difficult to draw definitive conclusions about this topic without drilling down into the details of the teams each player played both in and against. If you gave Charlton’s team mates, Rooney’s team mates and Lineker’s team mates FIFA like scores out of 100, for example, which player could objectively be seen to have had the better team mates?

If you could score the opposition teams in a similar fashion, or look at their world rankings at the time that England played against them and the players we’re discussing scored, who could be said to have faced the trickier teams?

It’s an argument for another time and for a team of stats guys to look into and even then it’s likely to be far from incontrovertible. The interesting thing in the whole debate that surrounds Rooney’s current achievement is that it appears to revolve around Charlton and England’s current striker with Lineker mentioned only as a side note.

Yet in reality surely the Match Of The Day presenter’s goal scoring achievements were the most laudable? He managed to combine the sheer volume of goals that Rooney is being praised for with the importance of scoring them in big games that were Charlton’s forte. Unlike the latter he didn’t manage to fire England to a trophy, but he helped to take them much closer than Rooney ever has. He also did it in far less games than Rooney has been afforded and achieved something no other Englishman has done – won the Golden Boot in the 1986 World Cup. He did this in just eight years, never scoring in a European Championship but only playing in one. 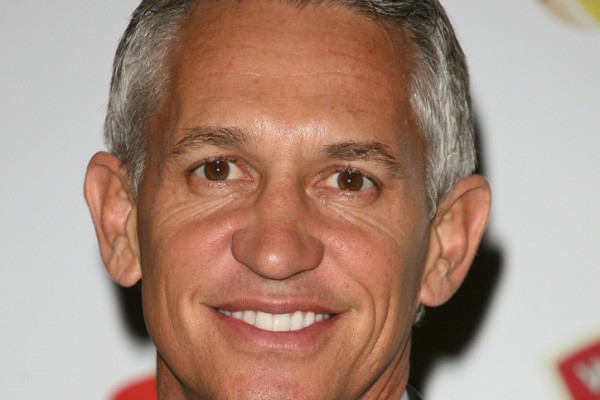 The other thing to note about Lineker is his temperament. Despite having a long career the big eared striker was never shown a yellow or red card by a referee. Compare that to Rooney, who even now has the ability to lose his cool when provoked, and there’s a clear difference in the mentality of the two strikers. The Scouser has seen 113 yellow cards flashed in his direction, 11 of them when representing his country, and 6 red cards, 2 whilst playing for England.

If the press coverage is anything to go by then in the modern game the amount of goals scored matters more than how many games it took to score them or what the quality of the opposition was. That the BBC would choose to call Rooney England’s “greatest” goal scorer rather than record goal scorer speaks volumes for what the modern day football fan considers to be important.

If Rooney fails to deliver in any of the major competitions he’ll play in before he hangs up his boots then his history will always feature an asterick that refers to the level of opposition he had to face. Time is ticking for the Manchester United striker but, right now, it’s still on his side. It remains to be seen whether or not he can make it count.